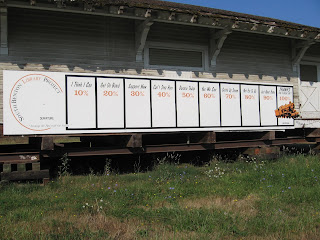 The sign shows it all! We now have 100% of the funding we need to build the new library here in Monroe/South Benton! Thanks to everyone on the South Benton Library Project board who worked so diligently and carefully to get all the grant writing done! You all are so wonderful. Thank you to all of our donors! From the smallest donations given by our local students to the major foundations who were beyond generous with their donations. It's simply amazing to have been able to have our funding completed in such a short time period of 4 years.

Here are two links that say all the details more eloquently than I ever could. Besides, I am so excited I can hardly stop dancing!

Keeping Up to Date on the New Library's Progress

The South Benton Library Project continues to advance ever closer to
securing the funds needed to begin construction on the anticipated new
library facility in Monroe that will serve the residents of south Benton
County for many years to come. In recent weeks an additional $50,000 has
been added to the project’ s coffers as a result of a grant awarded by The
Collins Foundation. The Collins Foundation, created in 1947 by Truman W.
Collins and other members of the family of E.S. Collins, is an independent
private foundation. The Collins Foundation exists to improve, enrich, and
give greater expression to the religious, educational, cultural, and scienti c
endeavors in the state of Oregon and to assist in improving the quality of
life in the state. The Foundation works through existing agencies and have
supported proposals submitted by colleges and universities, organized
religious groups, arts, cultural and civic organizations, and agencies devoted
to health, welfare and youth. This award is contingent upon raising the
balance of the necessary funds to complete the project.

This grant, along with recent awards from the Ford Family Foundation,
The James and Marion Miller Foundation, and the Meyer Memorial Trust,
strengthens the position of the Library Project in its application for a
Community Development Block Grant. The application for this federally
sponsored award was submitted in June and awardees will be announced this
August.

The Library Project has raised more than $840,000 since starting its capital
campaign in 2008. Tax-deductible contributions from the public toward
construction of the Library are still being accepted. Send checks made
payable to “ The South Benton Library Project” to PO Box 591, Monroe OR
97456.
Posted by Monroe Staff at 11:43 AM 1 comment:

The South Benton Library Project and the Monroe Community Library are sponsoring a free presentation by Dorcas Smucker, author, columnist, and engaging speaker, on Thursday, June 16, 2011 at 7:00 PM. The program will be held at the Monroe Fire Hall meeting room at 680 Commercial St., Monroe. In this program titled "Making a Difference,” Dorcas shares her experiences growing up with libraries. Dorcas writes the "Letter from Harrisburg" column for the Register Guard and is the author of 3 books: Downstairs the Queen is Knitting, Ordinary Days: Family Life in a Farmhouse, and Upstairs the Peasants are Revolting: More Family Life in a Farmhouse. She will have her books available for purchase. Free and open to the public
Posted by Monroe Staff at 3:19 PM 2 comments:

Promote Your Page Too 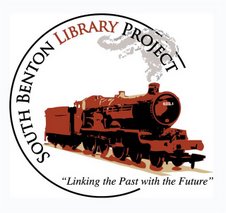 If you would like to donate to SBLP, our address is

Or you can visit the Sterling Bank in Monroe, let them know that you would like to help the New Monroe Library and they will assist you!

Banner on the Building! 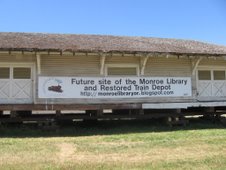 Here it is folks, but you've probably already seen it while driving through Monroe